Epitaph to a Tree?

HomeEpitaph to a Tree?
A- A A+

The little green menace has now been found in Greater Kansas City!  Emerald Ash Borer (EAB), a tiny beetle from Northeastern Asia, has been confirmed in Platte and Wyandotte counties. What’s the big deal? EAB kills all Ash trees and thus all the wild creatures dependent upon them. There are four species of Ash tree native to Missouri and Kansas and nearly 400 species of insects dependent upon them alone. White Ash (Fraxinus americana) is one of two species of ash trees native in Greater Kansas City statewide in Missouri and in the eastern third of Kansas. It grows in upland woods and is known for being one of the very best local trees for consistent fall color. White Ash turns colors early and stands out in the woods. Usually purplish to begin with, it can look like it is on fire with yellower tones inward changing to oranges, reds and purples on the outer leaves. As homeowners tend to choose trees for fall color, it is very popular in landscaping. ‘Rosehill’ is a cultivar of this native tree by our local Rosehill Nursery, while the cultivar ‘Autumn Purple’ is another popular selection of this tree with more purple fall color. The White Ash in the above image is a wild tree at Powell Gardens. Green Ash (Fraxinus pennsylvanica) is the other locally native ash tree and found statewide in both Kansas and Missouri. It thrives in low or bottomland woods but is very adaptable to soils wet to dry. Its tough adaptability has made it a good urban and street tree where it thrives even with concrete all around its roots. Green Ash turns yellow in the fall, never orange or red. The picture above is of a Green Ash planted in Powell Gardens’ parking lot arboretum of trees native to Kansas and Missouri. This little tree with nice fall color is on the south side of the Visitor Center and is a third species of ash native to our MO-KAN region but found wild only in Southeast Missouri: Pumpkin Ash(Fraxinus tomentosa). Pumpkin Ash has fall color usually in shades of orange. It grows in swamps and can actually survive growing in water, developing a swollen, buttressed trunk. Chuck Connor, Urban Forester for the Missouri Department of Conservation, told me that swollen base is the “pumpkin” and how it got its name. It is otherwise similar to White Ash but its twigs are covered with gray fuzz (known botanically as tomentum and how it got its botanical name). Blue Ash (Fraxinus quadrangulata) is the fourth species of native Ash and is found on the east and south edge of the metro eastward across Missouri and Southeastern Kansas. Its twigs are square and its late fall color is clear yellow (still green as this picture from this morning shows). It is called Blue Ash because its sap turns blue when exposed to air and can be used to make a blue dye. It grows almost exclusively in rocky woods and ledges so needs good drainage wherever planted: the local champion tree is in Loose Park and Powell Gardens’ largest tree is depicted above by the old visitor center with more trees in our parking lot arboretum. Ash trees make up about 4 percent of all trees in Missouri but a much larger percentage in Kansas, where they are the third most abundant tree. Overland Park’s tree inventory shows ash make up 23  percent of its street trees. The tallest orange tree just to the left of the chapel in the above image is a White Ash. At Powell Gardens, ash numbers closely match the Missouri’s average.

More than 400 species of insects require ash trees for their survival. Do we depend on ash trees for our survival? I’ll start with some statistics of what ash trees do for us in Greater Kansas City where 6.5 million ash trees are estimated to reside, 3 million of them in our residential areas.

The value of our local ash trees is more than $4.5 BILLION!!! Their value is based on their ecological services, starting with how much storm water they intercept before it runs into our antiquated and stressed storm water systems, and by reducing stream flooding. It also includes their pollution control as they not only trap particulates but have sequestered well over half a million tons of carbon dioxide, absorbing another 23,000+ tons every year. Their leafy shade saves on summer cooling costs and even their leafless winter presence helps with holding in heat.

Obviously they provide us with a lot of fresh oxygen to breathe as byproduct of their photosynthesis. How do we assign a value to their added beauty to our community and the tiny creatures they support? 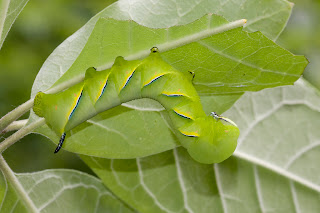 This beautiful, large caterpillar is an image of one of the creatures that will suffer without ash trees in our region. It’s the Laurel Sphinx, which may eat laurel where that plant is native in the East but over here where there is no laurel its sole native food plants are ash trees. Its adult moth is a sphinx moth that flies with hummingbird-like grace and I will say I’ve never seen the nocturnal moth though I find its beautiful caterpillars. This image is by Missouri Master Naturalist Linda Williams. 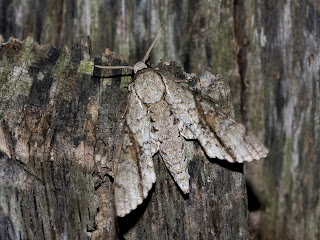 This moth is actual size and looks just like bark to avoid predators while at rest. It is an Ash Sphinx that flies just like a hummingbird but only at night. Without living ash trees this moth will become extinct because that is the only plant its caterpillars are designed to eat. This image also by Linda Williams. 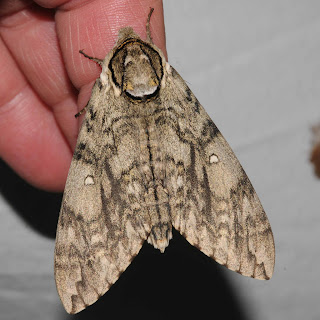 Here’s another ash-dependent moth, the Waved Sphinx. Sure, it’s doesn’t have bright colorful wings as it needs to blend in with bark all day. My favorite aspect is that each individual moth has a different face-like pattern on its back (thorax) outlined in a black circle. Photo by Betsy Betros. 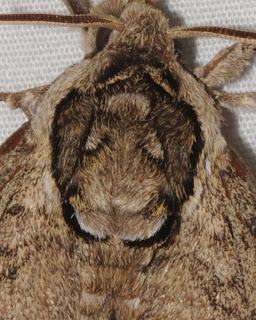 Here’s a different Waved Sphinx with a closeup of its back: sort of a puppy face on this one.  Photo by Betsy Betros. 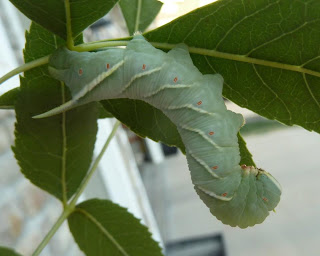 Why should we care if there are no ash trees and thus none of these sphinx moths?  I may let you ponder that for a future blog, and I’ve only depicted three of the 400 species of insects tied to ash trees. We don’t have a picture of the BIG DADDY of sphinx moths: the Great Ash Sphinx. (Don’t forget our annual Festival of Butterflies, where we hope to share these cool creatures with you in person!)

Wendy Powell recently told me that the ‘Rosehill’ White Ash were simply stunning along Ward Parkway this fall and that she hoped “it wasn’t their swan song.” The good news is you can treat and save your ash trees and I’ll write more about that later.

Start by identifying if you have ash trees on your property.  A lot is at stake for us to save these beautiful trees and the wealth of creatures they support–including us! Here are some links to learn more about EAB and we will have more information on our website soon: