HomeWinter’s Wear on Plants
A- A A+

The winter of 2013-2014 was certainly a cold stretch, the longest stretch of cold weather in the 18 winters I have lived here in Kansas City.  At Powell Gardens the lake froze over in late November and didn’t thaw until early March — that was a first! Powell Gardens lowest temperature was -10F (rounded up) with many mornings at or below zero F and little or no snow most of the time.  All this took a toll on plants that had begun creeping into our gardens from the South. We’ve experienced so many mild winters that there was zone creep of plants.  The winter was also exceedingly dry which also hurt plants, especially those normally hardy. I wanted to wait until everything had a chance to grow this spring to see what really survived and what was set back and as usual there were surprises on both extremes! 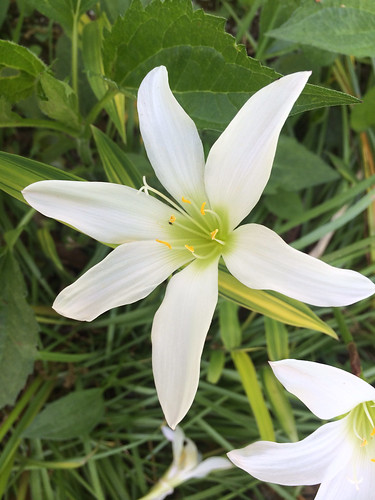 Blooming Atamasco Lilies (Zephyranthes atamasco) were a complete surprise to have survived the long-frozen ground. This native of the American South’s Gulf Coastal Plain is a personal favorite and often listed as hardy only to zone 7.  Look for these in the New Millennium border of the Perennial Garden. 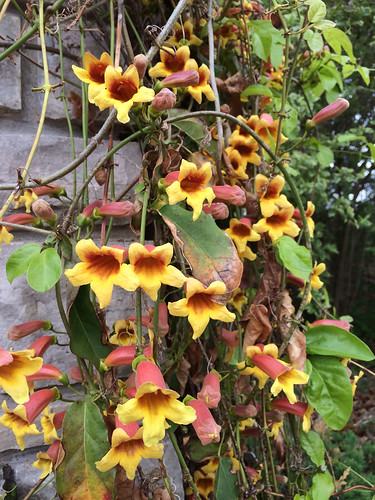 Crossvine (Bignonia capreolata) was another nice surprise to fully bloom after last winter.  The cocoa-scented flowers are such a delight to the senses and visited by bumblebees and hummingbirds.  Our plant is from Kentucky and this vine is native into Southeastern Missouri.  Crossvine from southern sources are not as hardy.

Some Plants survived in the milder micro-climate of Kansas City better than out here in our cold pocket that Powell Gardens lies in. 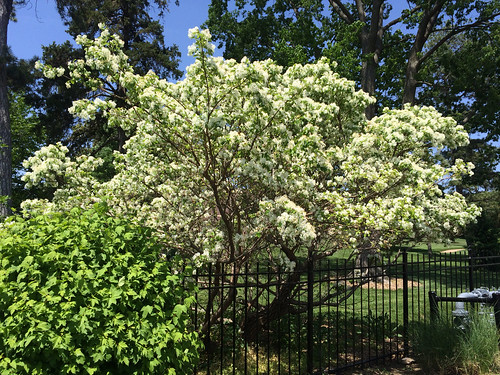 This is the round-leaved “southern” form of Chinese Fringetree (Chionanthus retusus) blooming on May 20th at Linda Hall Library in Kansas City. 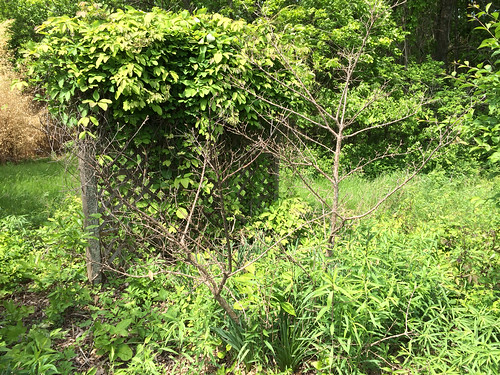 Powell Gardens’s southern form of Chinese Fringetree was killed outright by last winter.  It is known as hardy to -10F and a zone 6 plant. 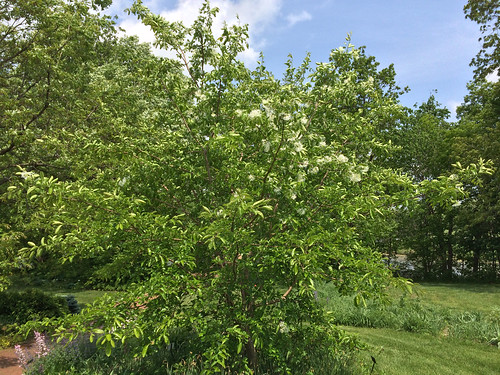 The “paperbark” form of Chinese Fringetree (Chionanthus retusus serrulatus) was unscathed at Powell Gardens but all our 3 trees are shy or inconsistent bloomers.  Chinese Fringetrees are currently all the rage in horticulture circles right now but we’re worried they may become the next invasive exotic wherever they are hardy. 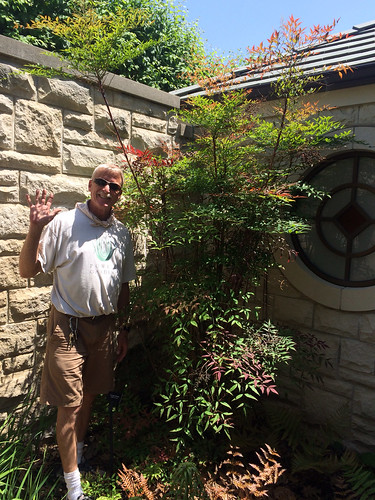 Speaking of invasives, “Heavenly Bamboo” Nandina (N. domestica) had leaf burn last winter but has totally re-leafed at the Kauffman Memorial Garden and is more than 8 feet tall now (pictured with Horticulturist, Duane Hoover, who is 6 feet tall). Kauffman Garden’s 2 plants are sheltered against stone walls.  Nandina is invasive in the South but our winters still keep it at bay here.

Some normally hardy plants had severe dieback, some killed outright.  I attribute much of it to the dry cold of last winter.  Our rain deficit since the fall of 2011 stands at more than 2 feet!  It is the driest spring I have ever witnessed here and because it is still green, many do not realize we are in a drought. 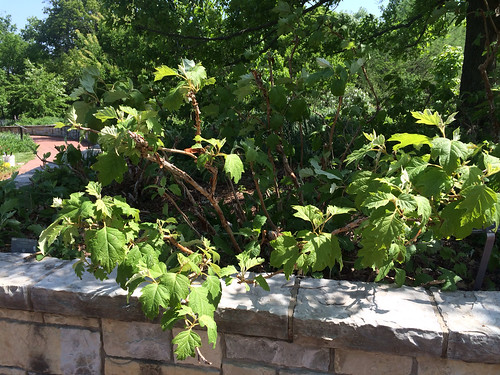 Oakleaf Hydrangea (Hydrangea quercifolia) was one plant that suffered extensive winter damage and this is what a plant looks like in the Perennial Garden after removal of all its dead and damaged wood.  There will be little or no flowering as they bloom off buds set last year on old wood.  Oakleaf Hydrangeas showed dieback across Powell Gardens and at the Kauffman Memorial Garden but not all were damaged.  Since you don’t want to look at such ugly pictures, another plant that suffered similar damage were the Winterberry Hollies (Ilex verticillata) wherever they did not receive extensive irrigation.

Crape Myrtles (Lagerstroemia) were another plant that had grown to tree size around Kansas City that suffered dieback and some may have been killed outright too.  Still be patient if your plant is seeing no life as they require very warm weather to emerge and we have not had much of that until this week. 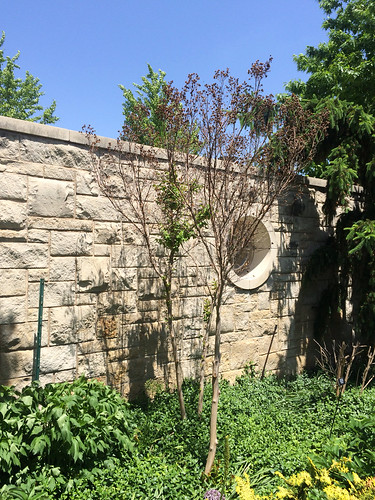 This Crape Myrtle against a south-facing wall in the Kauffman Memorial Garden survived the best, you can see its new growth coming from only its main trunk and only close to the wall.  Most Crape Myrtles have growth coming only from the base of the plant.  These basal sprouts will bloom later this summer as crape myrtles do bloom on new wood.  They are acting like perennials again!  Some other plants like Mimosa (Albizzia julibrissin var. rosea) and Blue Atlas Cedar (Cedrus atlantica ‘Glauca’) that used to die back around here did not suffer winter damage this past winter. 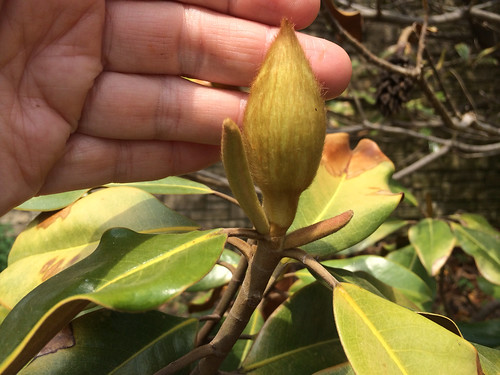 We have gotten a lot of questions from across the country on how our Southern Magnolias (Magnolia grandiflora) fared at Powell Gardens. They suffered severe leaf burn wherever they were exposed to bright winter sun, especially where reflected off warm walls so that the trees on the south side of our Visitor Center suffered worse than those in the more winter-shaded north side of the Visitor Center.  This is the flower bud of taken from one of our most burned magnolias and you can see it will bloom just fine next week.  Some branches will look unique as these evergreens have lost all their leaves and will bloom on bare stems!  In a couple of weeks all the new growth will emerge and the trees will recover.  If you have a burned magnolia, be patient, the new growth will soon be there and the tree will look grand once again. 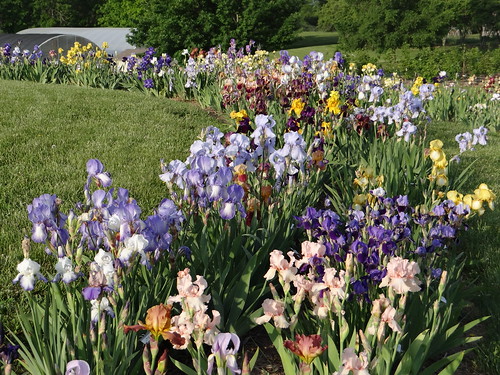 There’s nothing like Tall Bearded Iris to be tried and true in our gardens.  Here’s an image from Iris Hill taken Wednesday morning. It’s the top row of Dr. Norlan Henderson’s Award of Merit iris planting at Powell Gardens and it should still have good bloom through this weekend.