The 2014 growing season in the Heartland Harvest Garden will go down as the year of the Fire Blight. This menace has the capability to kill the trees it infects if the blight is not removed and treated. Certain pears are especially susceptible and if the blight is not controlled, it spells most certain death. Powell Gardens is not alone in dealing with this menace; an unprecedented infestation has been reported throughout the Greater Kansas City region and beyond from Kansas to Tennessee. 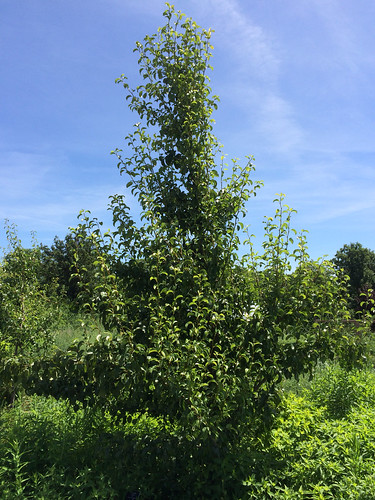 Not all trees in the Heartland Harvest Garden are infested as shown above in a very healthy pear in the garden. Some naturally resist the disease while others may not have been harmed by our late frost in mid-May. Heartland Harvest Garden staff did spray a pollinator-safe, organic “liquid copper soap” and a “microbial blend” on the trees to deflect space for the blight (which is a bacteria) as a preventative measure. We accomplished that spraying back in April during flower time when pollinators can spread the blight’s bacteria and infect new trees.

All was good until we had the surprise heavy frost in the garden well after bloom time, which caused slight damage to new growth on trees. The frost-damaged tissues were the perfect places for infestations of bacterial fire blight to take hold. Because this disease spreads best in cooler (65F to no more than 85F), damp conditions, trees were even more susceptible. 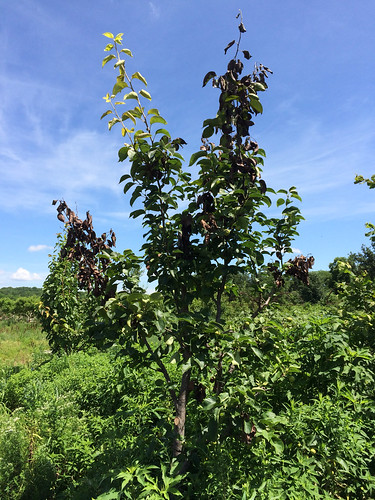 Above is a Fire Blight-infected pear in the Harvest Garden. You can see it’s aptly named as the infected stems and foliage look burned. After our late, mid-May frost the rains came, bringing ideal conditions for the spread of Fire Blight. This year, Bradford and other ornamental Callery pear cultivars previously thought immune to the disease became infested in our region–something never before observed. We don’t have invasive callery pears in our collections but there is some thought that the blight may have mutated to a more virulent strain because of them.  Scientists need to test that but an infestation of fire blight beyond anything ever observed is the result of this “perfect storm” of conditions and vectors that promoted the spread of the disease this season. 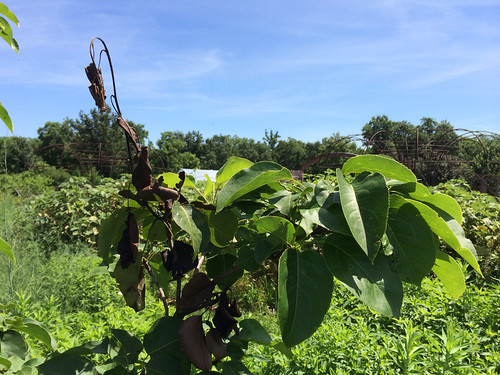 Here’s a closer look at a Fire Blight-infested stem on an Asian Pear (Pyrus pyrifolia).The infested stems must be cut out, including 8 inches of stem beyond the infected area. Your pruning tool must be disinfected between every cut you make as well. After a tree has had all its blight cut out, the tree is sprayed again with an organic copper-based spray to prevent further infestation. Now that our temperatures are reaching above 85F it should stop spreading.

There are antibiotic sprays as well as the copper, but all have already created resistant strains of the blight so we won’t know how successful our efforts will be until later. Though this was a very labor-intensive process, we did have to make an effort to save our infected fruit trees! Fire blight has a knack of being bad then disappearing until conditions are right again. Let’s hope we don’t see it visiting the gardens again.