The Big Chill of November 2014

Our November chill with temperatures today colder than our average January day has been a shock since it was 71F at the gardens on Monday (November 10th).  A sharp fall freeze occurs around once a decade and creates what is called a marcescent fall — it freezes many leaves on the trees.  Our current big chill is nowhere near as bad as the Halloween freeze of 1991 which actually killed many non-native trees in Greater Kansas City. 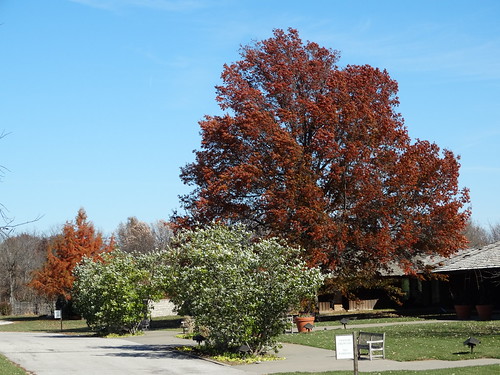 This was the scene on Monday (Nov. 10) in front of the Visitor Center: the large tree, a pin oak (Quercus palustris) was just past peak fall color, an orange fall colored baldcypress (Taxodium distichum) can be seen back left, and still green-leaved northern sweetbay magnolias (Magnolia virginiana var. virginiana). 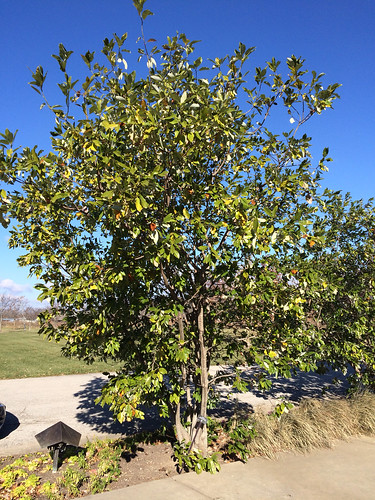 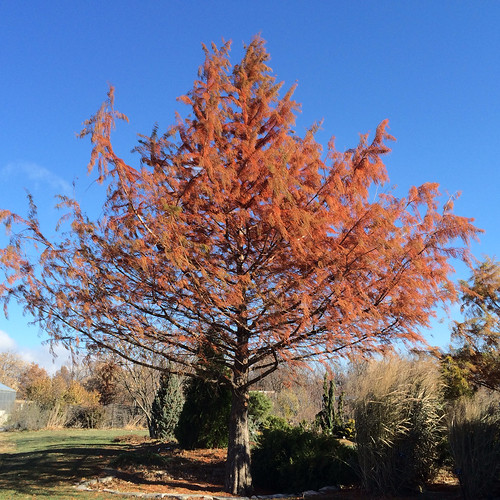 The baldcypress needles are also still hanging on the tree a rusty orange but will drop shortly with more wind and precipitation. Saturday’s predicted snowfall should bring them down.  Baldcypress is one of only a few deciduous conifers. 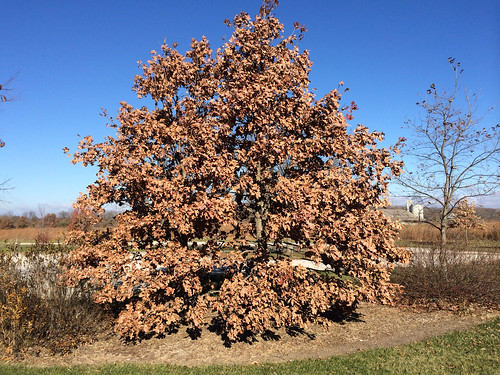 Many trees, especially younger oaks, hold their dead leaves in the fall regardless of the weather. This adaptation appears to have been a deterrence to browsing animals — once there were great herds of elk throughout the Midwest. Above is a grove of Post Oaks (Quercus stellata) in the parking lot this morning. They always hold their leaves into winter, providing shelter for songbirds. 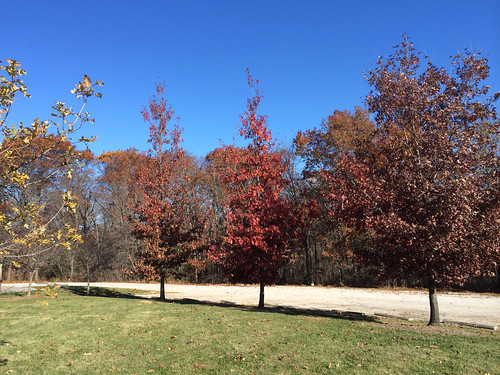 Our trio of Scarlet Oaks (Quercus coccinea) in the chapel parking lot didn’t color up as brilliant as usual except for the middle tree which is now freeze-dried a pretty red. You can see the leaves of a bur oak (Quercus macrocarpa) on the left, also still hanging on.

Some plants remain highly ornamental after our fall freezes. The deciduous hollies are now the most dazzling plants on the landscape because they are loaded with brilliant red fruit now and into winter. There are two species native to Missouri: the possumhaw (Ilex decidua) and the winterberry (Ilex verticillata).  Possumhaws become very large shrubs or small trees at maturity while winterberries grow into medium to large shrubs.

Possumhaw is one of the most soil tolerant of all woody plants. It grows wild from swamps to dry upland glades so takes flooding and drought equally well. It is also adapted to a wide range of soil pH from acid to alkaline — quite unusual for any plant and especially a holly. 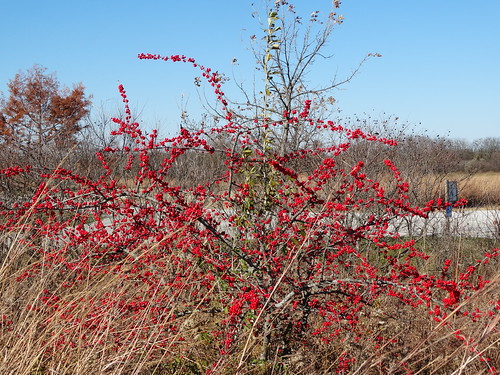 The above possumhaw is growing in the parking lot’s natural landscape with native prairie grasses. It is dazzling with red berries now.  Below, in front of the Gatehouse is a ‘Sprite’ winterberry holly, a compact cultivar that rarely grows more than five feet tall and wide. 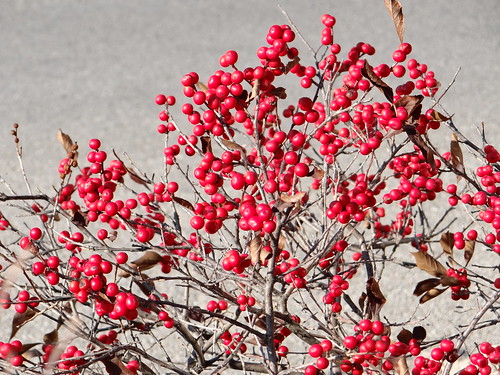 Winterberry grows wild in wetlands but does tolerate summer drought to some extent. Winterberry also prefers more acidic soils though will tolerate neutral and get chlorosis (yellowing of the leaves) in alkaline soils. Last winter and early spring was so dry that many area winterberry hollies perished, especially since the drought had been going on since late 2011 and our rain shortfall approached two feet of moisture. 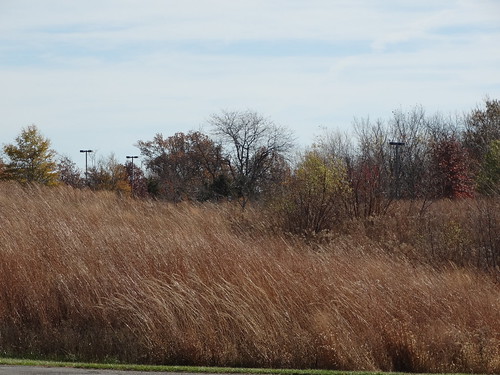 The November landscape is a study of earthy tones with the occasional brilliance of berries.  The prairie grasses are simply spectacular now and together with the marcescent foliage of our oaks, and the berries on our hollies, get out and enjoy the experience. Late fall, like every season, has its own uniqueness to embrace.