HomeThe Early Kobus-Star Magnolias
A- A A+

Our finest early blooming “precocious” Magnolias originate from Japan.  They are from three closely related species the Anise Magnolia (M. salicifolia), Kobus Magnolia (M. kobus) and Star Magnolia (M. stellata). Their early bloom previews our native wild plums and redbuds and their flowers do have some frost resistance so they are not reduced to brown mush after a light freeze as with many magnolias. 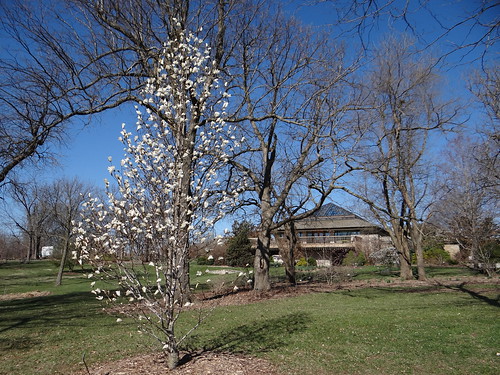 Here’s Powell Gardens only true Kobus Magnolia and it’s the variety ‘Borealis’ which is from Japan’s north island of Hokkaido.  It can become a very tall pyramidal tree over time reaching 50-60 feet!  Ours is well on its way and loaded with white flowers of 6 tepals (they’re neither petals nor sepals!).  You can see the Visitor Center in the background. 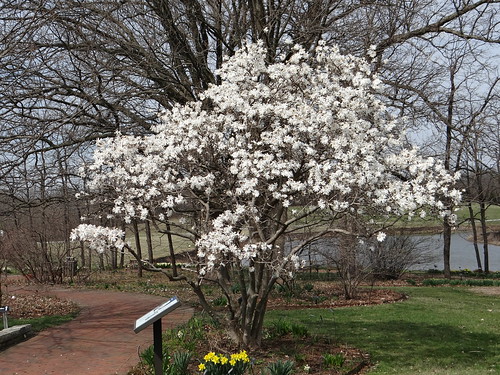 The Star Magnolia is a rare relative of the Kobus Magnolia found on only a few mountaintops in Japan and is much more shrubby.  It still grows into a small, multi-trunked tree over time, reaching around 20 feet in height at maturity. The flowers are composed of many tepals giving it a “starry” look and its name.  Powell Gardens has several selections of Star Magnolias in its collection and they are currently audibly abuzz with pollinators including 1000’s of honeybees. 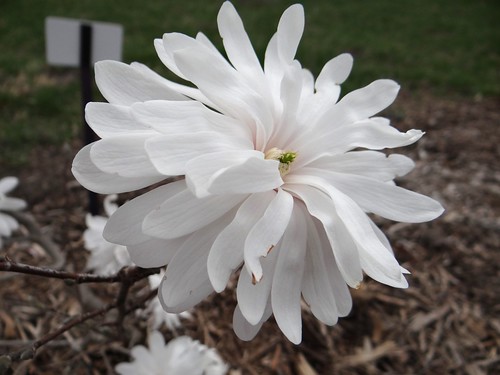 This is one of the newer cultivars of Star Magnolia named ‘Lyle’s Legacy’.  It has extra tepals for a full starry flower.  This selection was made from seedlings grown in Maine.  Star Magnolia is one of the hardiest of all magnolias, surviving -30F unscathed. 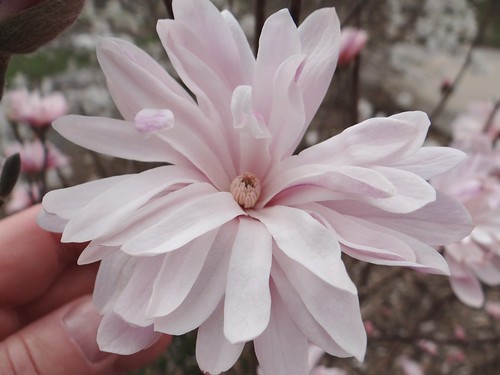 This is the Star Magnolia cultivar named ‘Chrysanthemumiflora’ for its very full, mum-like flowers.  It is also one of the best pink hued Star Magnolias.  Look for it near the Visitor Center trolley stop.

Kobus and Star Magnolias readily hybridize and their hybrids are named Magnolia x loebneri and display intermediate flowers with more than Kobus’s six tepals but less than the Star Magnolia. 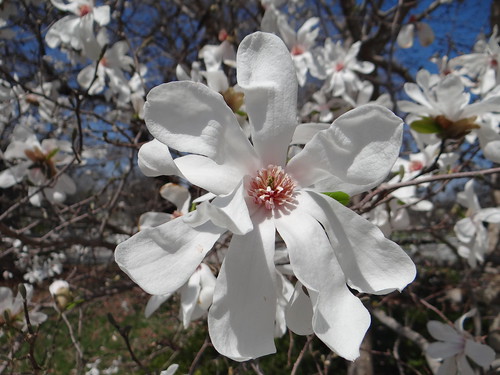 This is the hybrid Kobus-Star Magnolia ‘Dr. Merrill’ which becomes a spectacular upright, pyramidal tree to 40 feet. 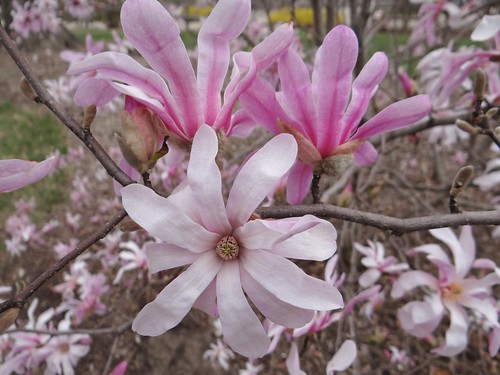 Here’s the Kobus-Star hybrid ‘Leonard Messel’ which is perhaps one of the finest hybrid magnolias for our area.  The flowers are produced in abundance, hardy to 28F (they take a frost well) and are so lovely from above (pink) and below (raspberry striped).  This tree will probably mature around 25 feet tall, slightly more vigorous than a Star Magnolia. 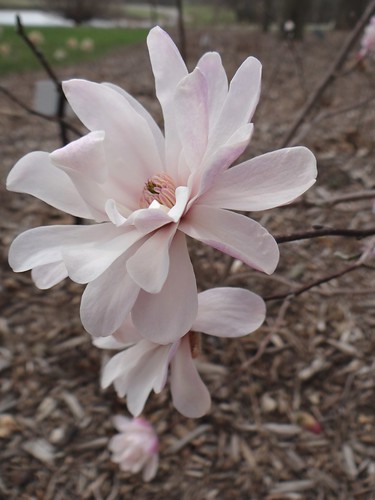 This is the new hybrid ‘Spring Petticoats’ which will be, perhaps the finest of all these Kobus-Star Magnolias.  It is softest pink with a decidedly more pink “petticoat.” 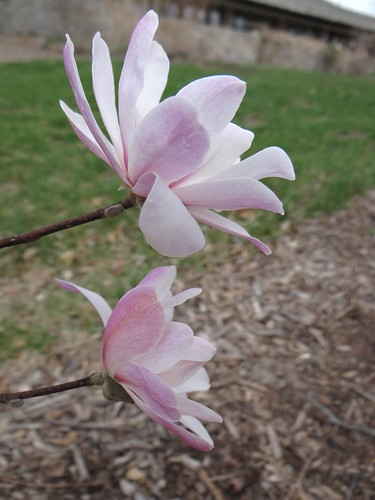 Here’s a picture of ‘Spring Petticoats’ from below, the Visitor Center is in the background.  Our plant is only 2 years old but I know some local nurseries are growing this new selection now so it should be more available to all gardeners soon. 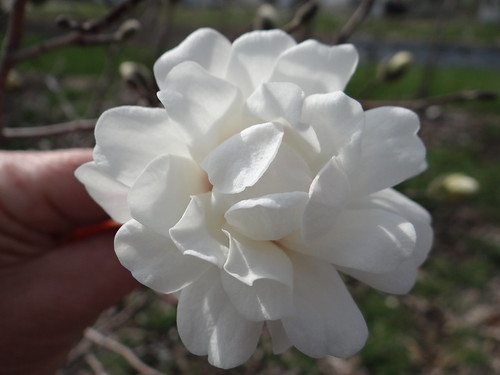 This Kobus-Star Hybrid aptly named ‘White Rose’ is another beauty and actually is not fully double, its center of stamens and pistil is just hidden by the rose-like tepals (so it’s still a great plant for pollinators). 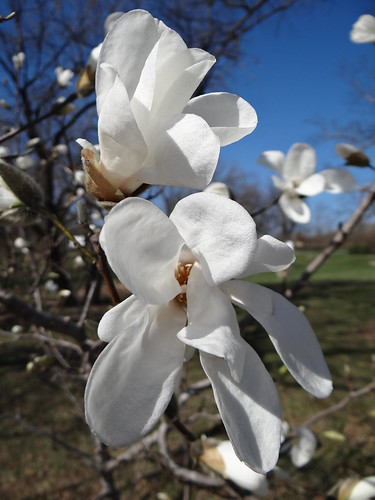 Anise Magnolia is the third Japanese Magnolia in the hardy-flowering group and we only have the cultivar ‘Miss Jack’ shown here.  Its flowers may be a bit floppy looking but it is stunning milky white and the fragrance is perhaps the most unusual of any magnolia in our collection: it smells like a wintergreen lifesavers candy!  It most definitely has oil of wintergreen in the fragrance and all true Anise Magnolias have an anise-like aroma when their leaves are crushed.

I hope you enjoyed this brief overview of some of Powell Gardens renowned collection of magnolias.  The early flowering cultivars are at peak now and unfortunately a big freeze is predicted for next Tuesday morning which may impact some of the next round of bloomers but we’ll keep you posted!  These are sure to be lovely this weekend before the cold front comes late on Sunday.